The Art of Naming a Cat: True Stories from Cat People and Cat Experts

What’s in a name? Whether you call your cat Fluffy or Fido or Thomas, your cat’s name can be whimsical, practical, funny, and charming. It can reflect their personality but, oftentimes, the cat’s name is a greater reflection of the human naming them than the cat itself. 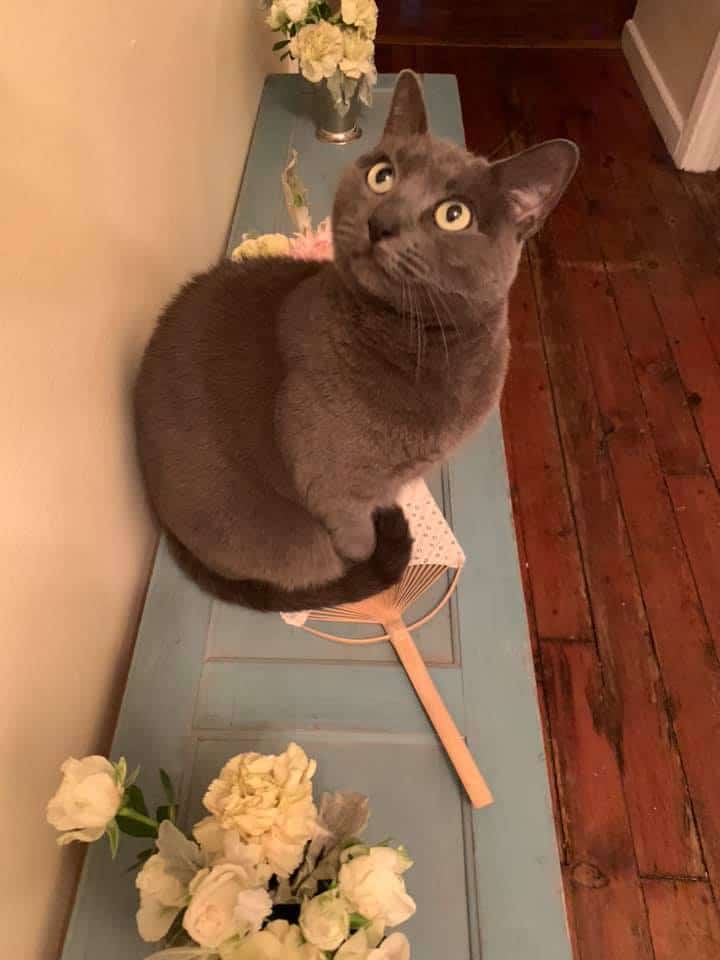 ANOUSHKA NEEDED A NAME THAT SUITED HER ELEGANCE AND HER RUSSIAN BLUE HERITAGE.

Hemingway called his six-toed cat Snowball; Theodore Roosevelt had a cat named Slippers. Abraham Lincoln had two cats, Tabby and Dixie, and was so fond of cats, he’d take in strays. (He also once reportedly said, “Dixie is smarter than my whole cabinet! And furthermore, she doesn’t talk back!”)

In my call for cat owners’ favorite cat names, I got some straightforward monikers — Simon, Oliver, Charlie. But there were many creative names with very elaborate backstories: Big Big Boy, so named because he was over 20 pounds, or Smokey, found in the walls, dusty and smoke-colored; a few famously named kitties, like David Bowie, and his alter ego Ziggy Stardust (last name, Shazam), Ozzy (like Osbourne), and Bugsy and Dudley (like Moore), as well as Laszlo (for Victor Laszlo and Laszlo Moholy-Nagy.)

Some of my favorites had a fictional, extremely imaginative backstory: Vesper Martini von Purrstenberg: “I wanted her to have a ridiculous, dramatic name conveying a life of luxury, which she does indeed enjoy,” explained her owner Rachel.

Anoushka, who was renamed from her original moniker, Lady, was also in need of something more fitting: “Though she truly was all that and a ball of catnip, she was a Russian Blue and she needed a more elegant, suiting name,” says her owner Georgette. “She was named for a brief early character in The Master and Margarita, a young maiden who spilled sunflower oil on the train tracks, causing a derailment.”

Then there’s the less fussy, but equally charming names of Rumble and Fur R. E:  “Rumble for the LOUD purring that sounds like a truck running in the living room, and Fur R. E. Is pronounced like the sports car [Ferrari],” explained their owner, Lannie.

To be sure, these are all more clever than the most common cat names, which are just fine, perfectly fine!

The most popular cat names

For boy cats: Oliver, Leo, Charlie, Milo, and Max. For girl cats: Luna, Chloe, Bella, Lucy, Lily. (Luna, for some reason, was extremely popular in recent years, the reasons for which we tried to dissect).

If you notice something in common about all these names except for “Max,” they are all more than one syllable.

“Shorter words/sounds are likely easier to understand—the message is clearer!” says Dr. Mikel Delgado, a cat behaviorist and researcher, and co-author of the book Total Cat Mojo. Two syllables, though, help cats hone in on their names.

Another animal expert, Dr. Roger Welton, author of The Man in the White Coat and the President of Maybeck Animal Hospital, says that two syllables and words with “ee” and “ck” sounds resonate more strongly with both dogs and cats. “Having a “ck” sound,” he says, “is very recognizable to dogs and cats from an auditory standpoint.”

“When we give our pet’s names, we are recognizing that they are an individual, and feel more connected to them. Just as we use names with people we interact with—it is part of what builds a relationship with another individual (whether cat, dog, human, etc),” Delgado says.

And even if you adopt a cat from someone, you may not want to change their title, because cats recognize their names says Scientific Reports, which conducted an experiment using cohabiting cats and “café cats.”

As the researchers noted, though cats have cohabited with humans since about 9,500 years ago, “their history of cohabitation with humans is shorter than that of dogs,”  and they have not been studied as much as their canine counterparts. But there are definite ways cats communicate with humans through vocalizations and purring.

While cats don’t stare at you when they are hungry (OK, some do), the researchers found “that cats show social referencing behaviour (gazing at a human face) when exposed to a potentially frightening object, and to some extent cats changed their behaviour depending on the facial expression of their owner (positive or negative).”

So yes, your cat is talking to you and understands you.

Both sets of cats in the study heard four general nouns spoken by the same people as well as their own name. Even when an unknown person said their name, they knew it.

Ok, but I want to change the cat’s name

I named my two kitties (both black and white tuxedo cats) Endora and Esmerelda, after the two witches in Bewitched. It seemed like a clever idea—they matched!

But years later, Endora was adopted after struggling with her sister cat and renamed as Mugsy. She’s adjusted to it just fine.

In retrospect, the science might caution against renaming the cat, but Delgado says: “I personally think that animals tend to respond more to our tone of voice (at least initially) than to a specific name. Many of us call cats by several cute nicknames, so I don’t think that changing a cat’s name or calling them a nickname is inherently problematic.”

Sally, who has been the owner of many greatly named cats, including Flora, Fauna, Pasch, George, and Murphy, says, “The inevitable nicknames are always fun. Fat Bastard, Love Bug, Fluffbutt, Mister Whiskers, and so on.”

Many of the owners who adopted cats felt that the pedestrian names they came with didn’t fit their personality. Rachel’s Vesper Martini von Purrstenberg was “Precious at the pound and it took about a week for her true name to reveal itself. She was clearly much too sassy to be called Precious.”

Some of the most famous cats didn’t always use their real name: For instance, the late Grumpy Cat only became Grumpy Cat after an image of the infamous frown went viral; her real name was Tartar Sauce.

Are there names to avoid giving a cat?

Besides the short-length rule, Delgado says, “We don’t know whether names harm cats or affect our perception of them. I do think that words matter in how we think about others, so I would suggest NOT giving your cat a “mean” name or a name that implies they are dangerous, even if it seems funny to you now! I personally like cute names for cats, but I know lots of cats with very human names, and they seem to be perfectly happy.”

If you can, let them choose their own name

It sounds weird, and maybe it is. Or maybe, they know more about themselves than we have yet to understand.

Betsy let her late cat choose her own moniker:  “I put a lot of names on index cards, and set them in a circle, put her in the middle and let her choose. Calpurnia, R.I.P..”

One Reply to “The Art of Naming a Cat: True Stories from Cat People and Cat Experts”