To explain how to introduce a cat to a dog, let me tell you about Phoebe.

Phoebe was about one-and-a-half years old when I first learned about her. A friend of my friend found Phoebe in a garage covered in grease as a kitten but needed to rehome her because of some serious changes in his life. Although my San Francisco apartment was already filled with fluff, I’d been thinking about adding a cat to my two-dog family. Phoebe was in the right place at the right time.

A few days later, the blue-eyed beauty showed up wrapped in a fleece blanket in her dad’s arms. I’d locked away the dogs so she could enter the house safely but after the goodbyes, it was time to switch gears.

To introduce this sweet cat into a dog household, we’d have to start off on the right foot…er, paw.

How to Introduce a Cat to a Dog Household

1: Introduce the cat to the dog by sound and scent

The first night Phoebe arrived, she was terrified. Cats are creatures of habit. They don’t deal well with change and everything in this little girl’s life had just gone topsy-turvy.

To help her feel secure in this new situation, I set up a safe room with everything she would need to be comfortable, such as a cat tree, hiding places, soft bedding, toys, water, food, and a litter box.

For at least three days, if not a full week, I planned to keep the door closed to prevent any of the four-legged residents from getting a look at each other.

While they couldn’t see their new family member, the dogs knew she was there. They could smell her and hear her movements. One even posted up a foot from the door for nearly an hour, peering under the door crack hoping to get a glimpse.

To help the animals acclimate more quickly to one another’s scent, I exchanged blankets and beds twice a day, putting Phoebe’s in the living room and bedroom and vice versa. If one of the dogs became too pushy about seeing what was behind the closed door, I redirected them elsewhere with toys, affection, or training games. 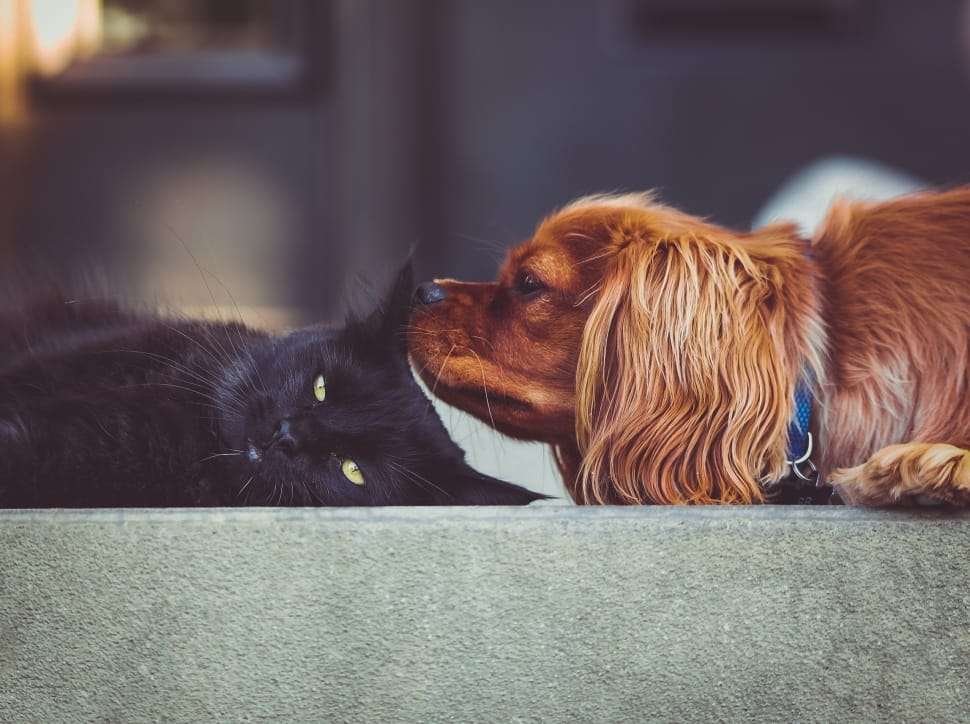 By the end of the week, Phoebe was feeling more settled. She no longer hid when I entered her room and seemed curious about the world beyond. Time to move on to phase two!

First, I set up a baby gate in the doorway of the safe room, so Phoebe had a window to the world that the dogs couldn’t breach. Phoebe was still anxious—a personality trait she keeps to this day—so I didn’t expect her to jump over the gate, but if you have a curious cat, you’ll want to only use the baby gate when you’re supervising.

Next, it was time to introduce Phoebe to the rest of the house in the least stressful way possible. On her first outing, I made sure that the dogs were completely out of the way and gave her a solid 30 minutes to explore.

After a few days, when she seemed more confident moving around outside the safe room, it was time to let her see her new sisters.

At this stage, I didn’t want the dogs to interact with Phoebe. Instead, the plan was to allow them to watch each other move around in a no-pressure, positive way. On our first attempt, I leashed both dogs at my side, armed myself with a bag full of treats, and turned on a movie.

My goal was to spend the entire movie rewarding my pups for remaining calm when Phoebe moved around. Each time they turned toward her, I told the dogs “Yes!” and gave them a treat.

On other trials, I flipped the script. Instead of putting the dogs on leash and letting Phoebe explore, I placed Phoebe in a mesh cat carrier at my side and let the dogs do their thing. When they were curious enough to come within five feet of Phoebe, I rewarded her with the “Yes!” followed by a treat.

When one got within a foot or two, I rewarded her rapidly for tolerating their presence. 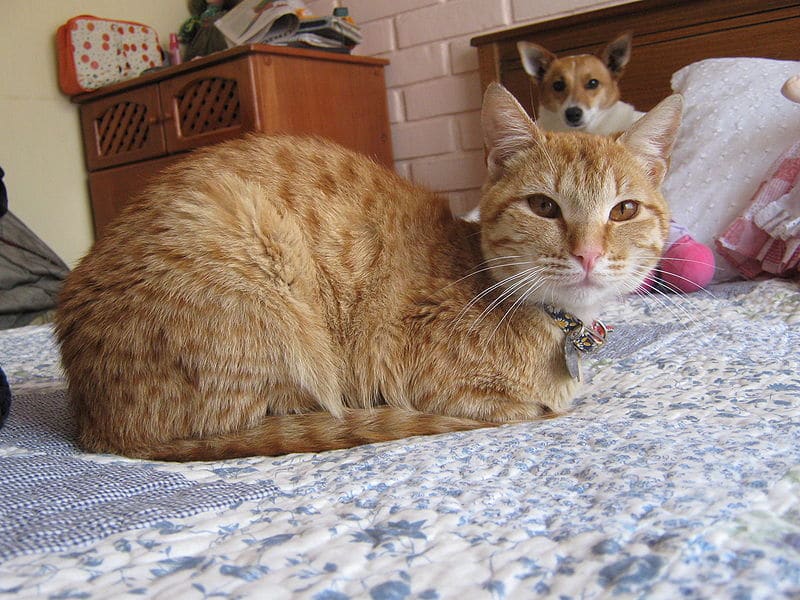 3: Introducing a cat to a dog face-to-face

When Phoebe and the doggos seemed less interested in each other’s presence, I started removing barriers. In this phase, I kept the dogs on a leash at my side, but Phoebe was no longer behind a barrier.

Instead, as she sauntered around the living room, I rewarded the dogs for remaining calm, giving them a “Yes!” followed by a food reward when they turned her way.

Anytime the dogs got more aroused by her presence, I calmly asked them to return to me and played a brief game of tug or asked them to put their energy into a fun behavior like “spin” or “touch.”

In the beginning, when the dogs were still a little over-eager, we kept these sessions to a short 10-15 minutes, but once they got more used to Phoebe’s movements, we kept the interaction going for up to two hours.

4: Transition to no barriers

Introducing a cat to a dog household can take time. For us, after three weeks (!), I put the animals to the final test by letting them all share the same space with no leashes, baby gates, or cat carriers. I added some high shelves and a tall cat tree to my home to make sure that Phoebe could easily get to safety if things got too dicey.

Although I felt confident that all three could coexist without too much trouble, I gave the situation a couple more weeks to develop before leaving them alone in the same space when I was out of the house.

From Phoebe’s first day in my home to where I trusted the animals to share the same space without supervision took about four weeks. I was lucky that my dogs were fairly mellow with Phoebe but her anxiety prevented us from moving faster.

Depending on the age and energy level of your dogs and whether they’ve had any cat exposure before, this process could take longer. With a confident kitty and calm dogs, you may speed up the process to two weeks.

No matter what the personality and experience of your pets, be sure to introduce a cat to a dog at the speed that’s right for everyone—it’s worth it to ensure a long and happy future together.