FOR CAT PEOPLE | By Katie Nowak

There’s just something about a black cat. A little mystery, a little mystique, and a lot of adorable. It’s no wonder that black cats (of any kind) hold a special place in our hearts.

Here are 11 breeds that commonly come with black coats. 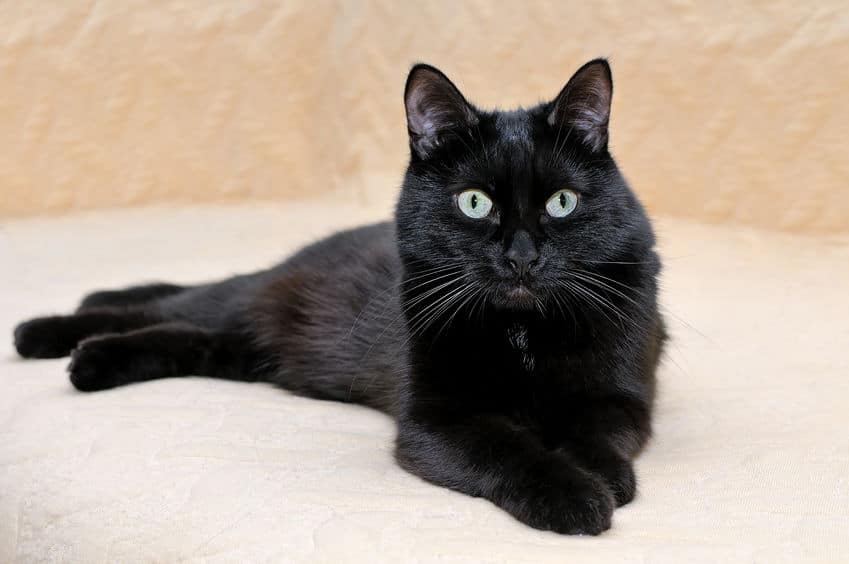 The Bombay is known for his sleek, black coat (that some say resembles patent leather). This designer breed was developed to retain the deep black color of the American shorthair and the sleek, muscular body of the Burmese. The resulting breed not only has these great looks but also has the easygoing personality of the American shorthair and the social nature of the Bombay.

Interesting fact: You can polish your Bombay with a chamois to obtain that sleek shine! 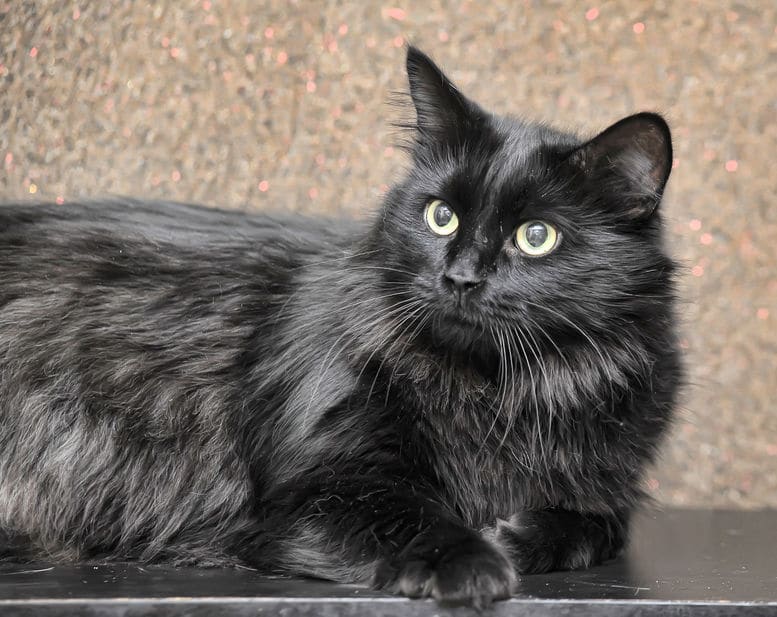 The Chantilly-Tiffany cat comes in many colors (chocolate, cinnamon, lilac), but often has a soft black coat with a characteristically silky feel. These cats are both affectionate and demanding, social and loyal—which are some fantastic lap-cat qualities. 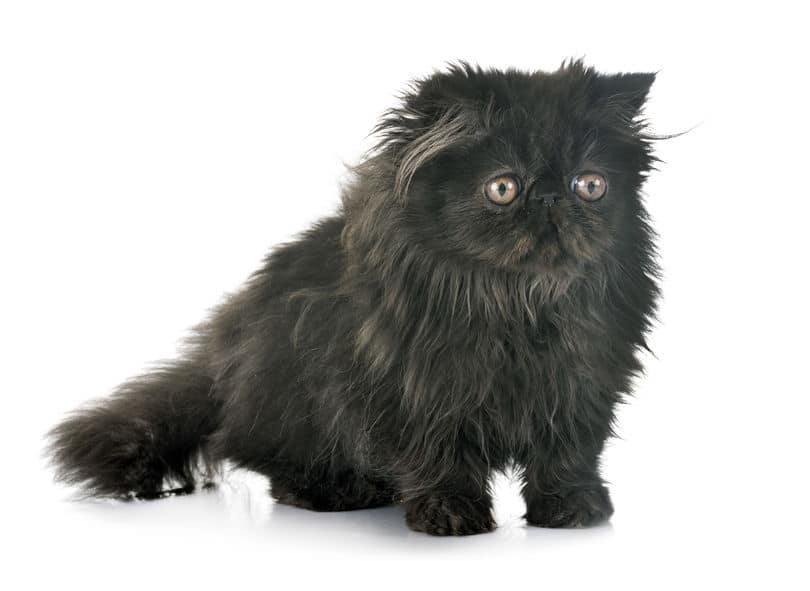 The Persian is everybody’s favorite flat-faced feline. Easily recognizable, this girl commonly sports a soft, glossy black coat. In fact, that coat is so high maintenance that many recommend Persians stay indoors so their coats can be kept in tip-top shape. (Not a bad idea, since all cats are safer inside anyway.)

Persians have soft, pleasant voices and are quite affectionate, if a little shy. They do best in calm environments, and when at home, can be quite playful, according to the Cat Fanciers’ Association. 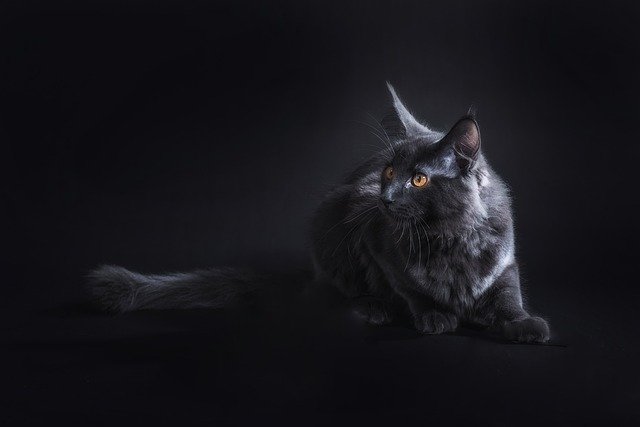 The Maine Coon cat is the largest cat breed, boasting many Guinness Records for…pretty much everything that has to do with being a big, heavy, long cat. Despite their size, these guys are gentle and very loving. They’re known for being climbers, and, having owned two of them, I can vouch for this. Similarly, a jump from the floor to the top of the fridge is no challenge for these strong, muscular cats.

Their coats come in five solid colors and several tabby patterns. Of the solid coats, you can find black (of course), white, blue, red, or cream. The coats are long and silky but require less maintenance than some other long-haired breeds.

So what is a rex?  Rexed cats have tufted hair, which means two things: super cute, and more than a few bad hair days. Though there are several types of rexed cats, they come in all different shapes and sizes, and—as you might have guessed—many of them have black coats. 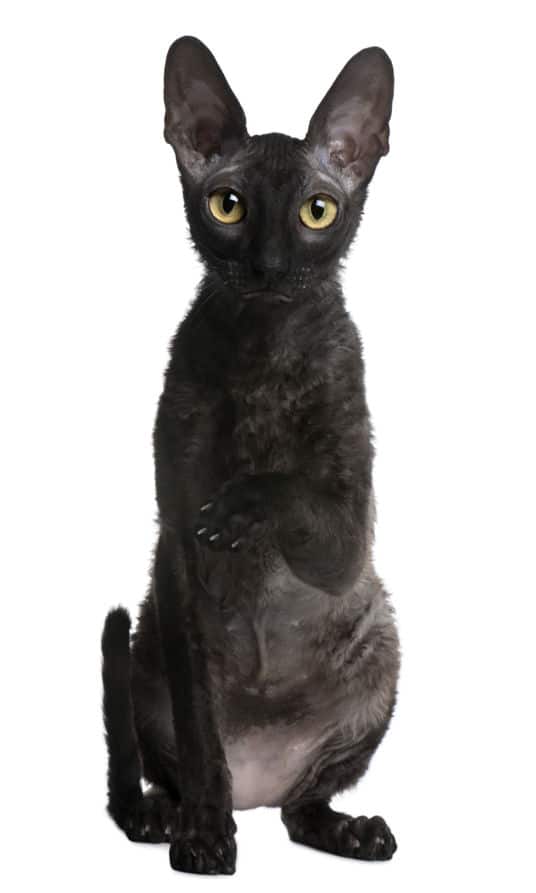 The Cornish Rex is a very distinct-looking cat, with a curved body, large ears and short, curly hair that feel like lambs’ coats to the touch. Adding to their unique look, these guys have egg-shaped heads and large, high-set ears. As you might have guessed, these beauties can have dark coats that the Cat Fanciers’ Association describes as “coal black.”  Even the pads of their paws and their noses will be black. Besides black, these guys can also have white, cream, blue, red, chocolate or silver coats.

Interesting fact: Kallibunker, the kitten credited as the first Cornish Rex, was born in a litter of barn cats in Cornwall, England in 1953.

Known for being easy-going and relaxed, the Selkirk Rex makes a great pet. A mix between the Persian, British shorthair, and Exotic shorthair, the Selkirk Rex inherited distinct personality traits from each: laid back, cuddly and playful, to name a few. The Selkirk Rex can have a long or short coat, which is dense and plush, with a telltale curl that makes them look a little like teddy bears. Given their breeding, these guys come in just about any color, black included.

Interesting Fact: The Selkirk Rex was recognized by the Guinness Book of World Records as the World’s Newest Cat. 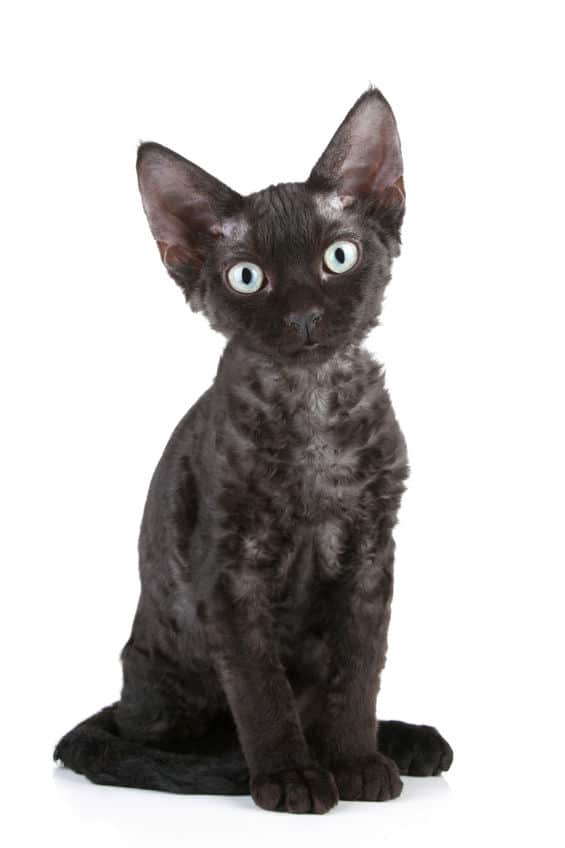 Known for being trouble-makers, the Devon Rex sports the same curly coat as his cousins. Devon Rexes are smaller cats, according to the International Cat Association (TICA), but are playful, powerful, and love to perch. They come in just about any color, black included.

Interesting fact: Devon Rexes are usually warm to the touch, even though they have the same body temperature as other cats, probably because their coat releases heat. 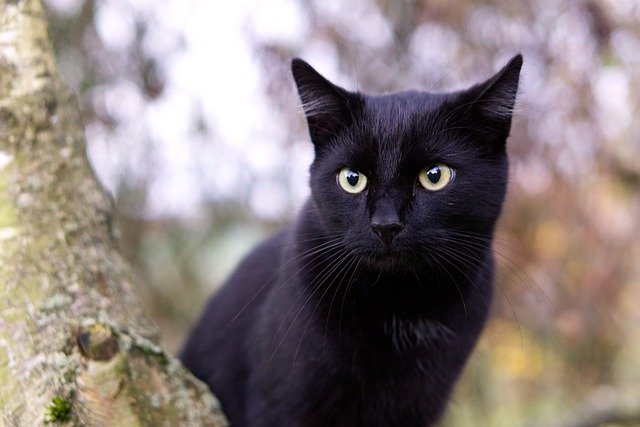 These guys are so popular (and plentiful). They’re gentle, make ideal pets for households with kids, and usually live a long life, according to the Cat Fancier’s Association. As with many breeds, they come in a variety of colors, but might be most popular in black. Some kittens with black coats will have smoky colors on their belly and tail, but these should turn to black by adulthood.

Interesting fact: It’s possible that the ancestor to the modern-day American shorthair came to America on the Mayflower. 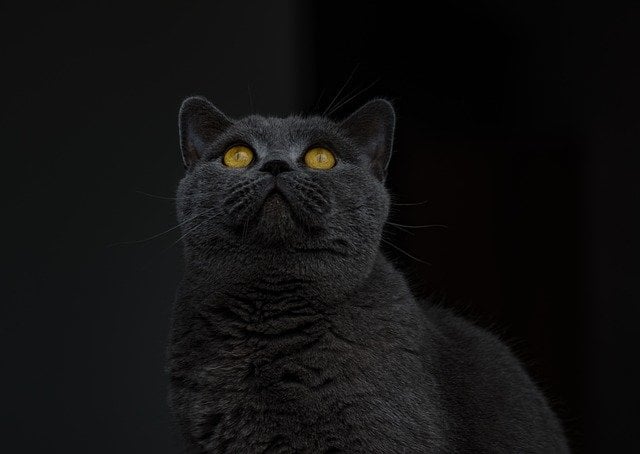 British shorthairs are known for being calm, easygoing, and not too talkative, according to the Cat Fancier’s Association. These guys grow to a medium-to-large size, and while they are most popular with a blue (deep gray) coat, they can black, too. Black-coated British shorthairs are jet black all around (including nose and paws) and will have gold eyes.

Interesting fact: British shorthairs are so amiable, owners keep them alongside a variety of other pets: dogs, rabbits, and even birds.

Bobtails, as the name indicates, have naturally short, or “bobbed” tails, and come in a variety of coat colors, including black.

Japanese Bobtails are known for being sociable, playful, and interactive. They also have excel at feline agility, according to the Cat Fancier’s Association. Like most cat breeds, they come in a wide variety of colors.  Black bobtails have dense, coal-black and sleek coats.

Interesting Fact: Each bobbed tail, like a fingerprint, is unique to each cat. 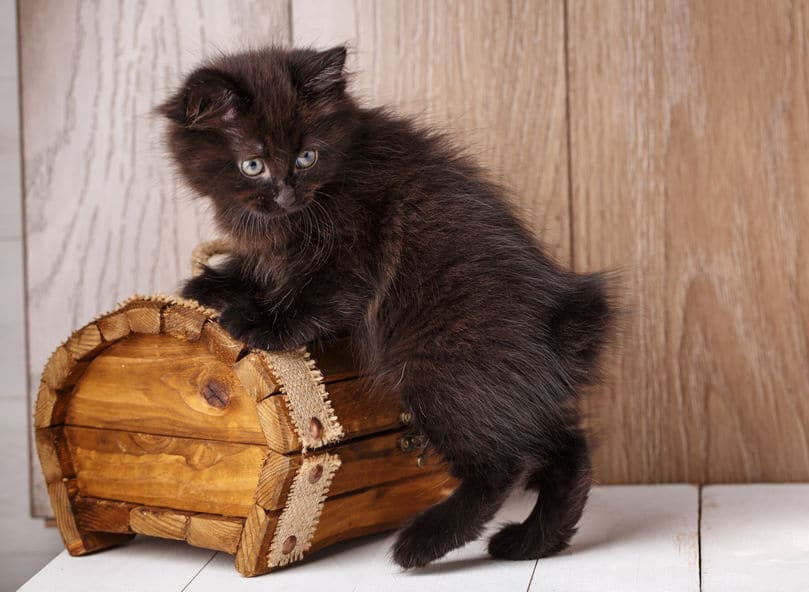 American bobtails are large, athletic cats with above-average intelligence, according to TICA. These guys are great family pets because they can be social with just about anyone. Unlike more picky breeds, they won’t choose just one favorite family member.  Their coats come in a variety of colors and can be long or short. Black-coated bobtails have a dense, soft coat and can have black or brown pads on their paws.

Interesting fact: Short-Haired bobtails have a coat that feels like a rabbit pelt.