I love to watch my cat sleeping. He looks so relaxed and peaceful. What could he be dreaming about that makes his whiskers twitch and his paws bat clumsily at invisible toys?

Yes, cats dream.  Animal scientists agree that among all mammals, the similarities in brain structure, brain activity during sleep, and sleep behaviors suggest that dreaming is likely universal.

But can we know what cats dream about? Recent research gives us some pretty good clues. The good news: your cat probably dreams about his favorite things, including you. 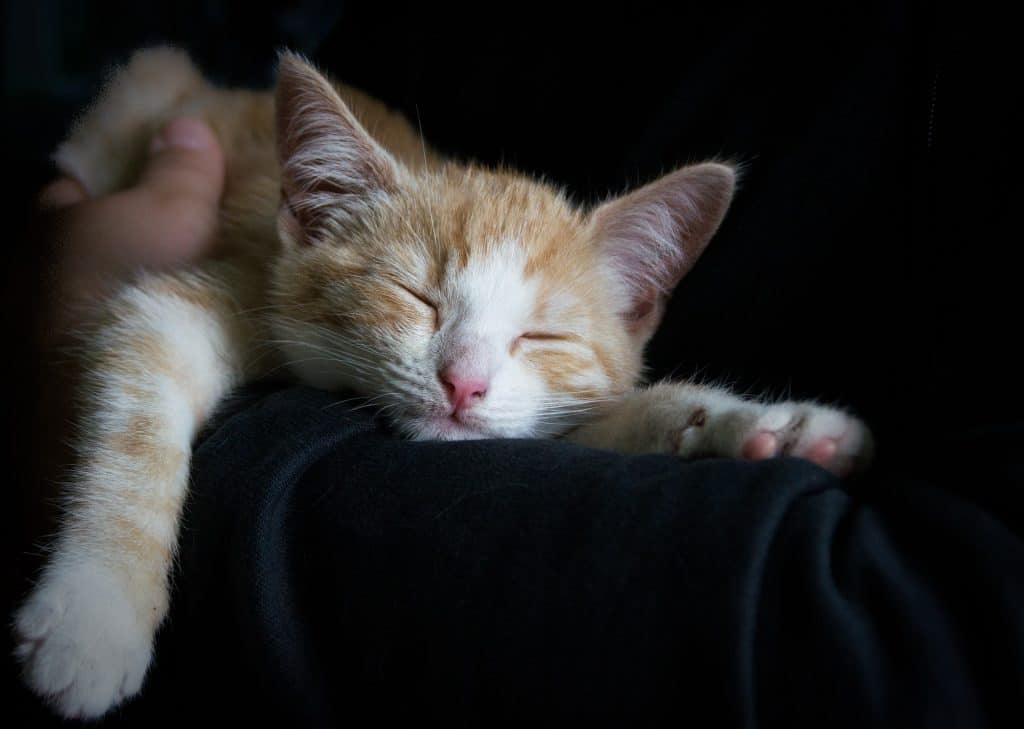 How do dreams work?

Dreams are more likely to occur during some stages of sleep than others. Sleep is a time when we stop interacting with the outside world and our brains process the many experiences we had during the day. Technically, sleep is a state of reduced consciousness, sensory input, and voluntary motor activity.

There are two types of sleep: rapid eye movement (REM) sleep and non-REM sleep. Most dreaming occurs during REM sleep, a phase of random and quick movements of the eyes under closed eyelids. Body movement is shut off by the brain, so it’s not possible to physically act out dreams.

Dreams that occur during REM sleep tend to be detailed, long, and sometimes imaginative, whereas dreams in non-REM sleep are generally short and replay the activities of the day. Like the many nights I fell asleep to (non-REM) dreams of Tetris when I was in college.

During REM sleep, a cat might twitch, show paw movements, or move her mouth as though nursing or grooming, but she’s not able to pounce or climb the curtains.

“Cats exhibit all the physiological and behavioral characteristics of dreaming sleep in humans: low voltage fast wave activity, fast EEG activity – where the cerebral cortex (thinking centre) and hippocampus (memory centre) are active in the face of continued behavioral sleep,” Dr. Nicholas H. Dodman, author of Pets on the Couch and professor of Veterinary Medicine at Tufts University, told Metro.co.uk.

But cats’ sleep cycles are shorter. Cats experience REM sleep three times more frequently than people: every 25 minutes, compared to every 90 minutes in people. That means that cats can reach REM sleep even during cat naps.

Perhaps because their brains are developing so quickly, young cats spend more time in REM sleep than older cats.

Why do cats dream?

The function of dreams seems to be the same for cats and people. During sleep, we process experiences and information that we encountered during the day. Dreaming helps us process emotions and form memories.

While the story in a dream may not be true to life, the actions that we take in dreams are familiar: walking down the street, getting the mail from the mailbox, meeting with coworkers.

Likewise, the actions that cats experience in their dreams are likely similar to their daily activities. Researchers have observed that during REM sleep, the dreamer’s brain activity (whether cat, rat, or human) looks very similar to active parts of the day.

In fact, sleep researcher Matthew Wilson at MIT found that with rats, each move they make in a maze creates a unique signature of brain activity. Monitoring the same rat’s brain activity during sleep, he found that it’s possible to tell where the dreaming rat was located in the maze and whether they were running or standing still.

What do cats dream about?

“Like us, cats will probably dream about things that have gone on in the recent or distant past,” Dr.  Dodman continued. “Maybe stalking a bird or mouse. Maybe being petted. Maybe an altercation with another cat or dog.”

Does your cat dream about you? Probably. Your cat may recreate her wakeful experiences with you during her many naps. Does she love the way you scratch her ears or the sound of a bag of treats rattling? Does she come running when you call her name? Those daily interactions are likely to be part of her dreams.

Like people, cats can probably have nightmares sometimes, too. Animals process stress and trauma through dreams and can show signs of nightmares following stressful events.

I had a dream recently that I was surrounded by tiny dolphins while I was swimming in a lake. What would the kitty equivalent be? I wonder what kind of fantastical worlds Gandalf Carrot Cupcake visits during his 15-20 hours of daily slumber.

It’s super rare for cats to sleepwalk. In fact, in cats, sleepwalking is the sign of a specific type of brain injury. What do cats do when they sleepwalk? They pounce, hunt, and run, of course! Fortunately for your cat and the tidiness of your house, cat sleepwalking has been observed primarily only in laboratory experiments. 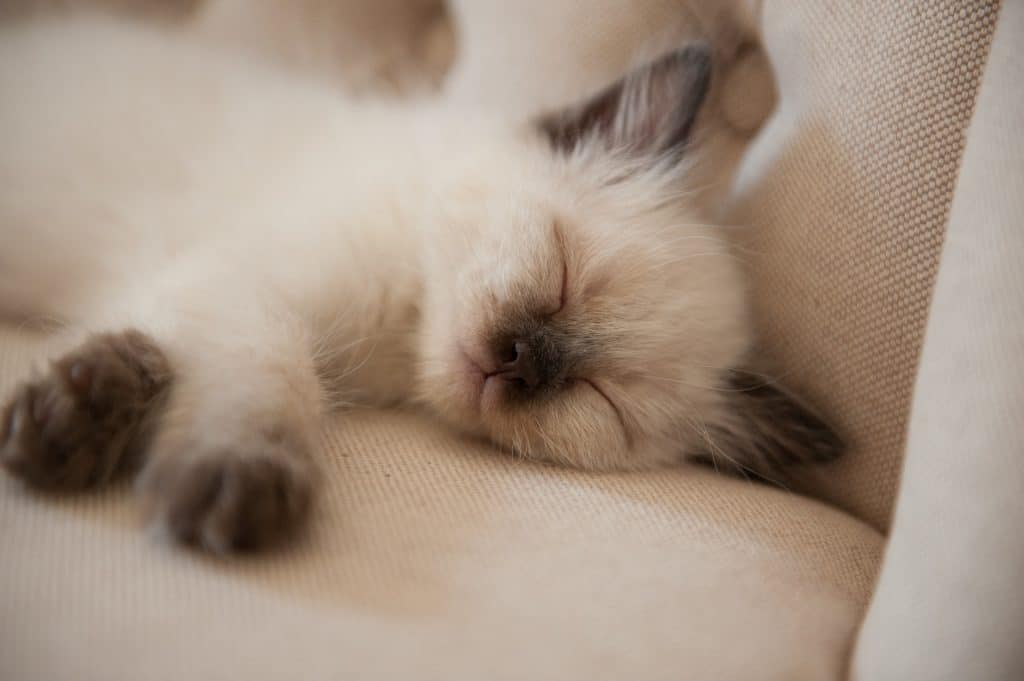 Like people, cats can have sleep problems that interfere with deep sleep and keep them from reaching those REM-induced dreams. A cat that is restless and complaining with meows or crying might be sleep deprived.

Sleep deprivation in cats can be caused by sleep apnea, a condition that affects breathing while asleep and can keep the nervous system on high alert. Cats can also suffer from insomnia.

If you find that your cat isn’t getting enough rest, visit your vet to rule out illness and ask for suggestions on encouraging your cat to sleep. These might include some extra playtime to burn off energy, getting your cat a playmate to tire her out, and having a nice big meal before bedtime.

Whatever you do, don’t give in to a cat that wants to wake you up in the middle of the night.  Her nocturnal schedule can cause chaos for your sleep.  With some persistence on your part, it is possible to train her to respect your sleeping and waking hours.